Today, December 13, 2009, is the fifth anniversary of ByJane. And today is also it’s swan song. Those of you who check in from time to time know that I’ve only been posting from time to time. And when I do, I generally cross-post to MidLifeBloggers--which seems like a waste of, well not paper, but bytes...or something.

And too, the kind of posts I did for ByJane seemed a bit too casual for MidLifeBloggers. With ByJane, I just wrote--whatever. Sometimes I would start in one place and end up in a totally different direction. But that was the fun of it. That is, actually, what blogging is about, at least to my mind. That’s not what MidLifeBloggers is about. When I choose posts to put up, I’m looking for what are basically non-fiction essays. They have a beginning, a middle and an end. They make a point, and they use some or all of the tools of literary writing to do so.

Still I miss writing those casual, personal posts, but all of my energies these days are going into MidLifeBloggers. That’s where I’m doing the social media dance that one does to build an audience. It’s where I’ve got plans and intentions and goals and dreams and--well, you know. So I’m saying goodbye to ByJane as the blog exists in this incarnation. This will be my last post at this url. But because I miss blogging and because I still want to do that meandering personal kind of writing, I’m officially folding ByJane in to MidLifeBloggers. There’s a sweet spot on the sidebar where you can read ByJane; you’ll just have to go to MidLifeBloggers to do it.

Shuffle, shuffle...creak, creak. Those sounds are me trying to get upright and in the saddle again after several (SEVERAL!) weeks off. First, I was at BlogWorld & New Media Expo in Vegas--about which more anon. Then I was at death's door (okay, slight exaggeration) from the dreaded flu. Well--not The Flu. But some flu.

Here's what I wrote before I got sick:

It has become the convention for bloggers that after a conference, one writes a roundup of sorts, in which one links to all those new and exciting people one met. One does this; I, however, do not. It's just another example of how stubborn I can be about doing what one is supposed to. Especially when it would be helpful to one's goals....do I hear some whispers about "cutting nose to spite face"?

To continue and finish all those thoughts....

After BlogHer'09, the roundup I wrote attracted the attention of several of the bigwigs at BlogWorldExpo, most notably Rick Calvert who started the who thing. I compared the sessions at BWE08 to those at BH09, with the former coming out ahead in substance and relevance. BWE09 was no different. The sessions were, in the main, incredibly informative. Last year I just went wherever my interest took me; this year, however, I had a plan. I started out in the news business as a radio reporter, so it makes sense that I'm interested in adding a multi-media aspect to MidLifeBloggers. Therefore, I chose the Podcasting/Audio/Video track, and the basic ones at that.

Andy Walker of Butterscotch filled his session, "Video Podcasting 101", with an hours-worth of helpful information, such as "Plan your show, perform your plan. Ad lib with structure. Whiteboard with bullet points. Improvise inside a structure." Similarly, Lee and Sara O'Donnell of Average Betty gave solid advice about all aspects from pre through post production in their session "Work With Whatcha Got: Video Production." By the time I had sat through those sessions, I knew enough to know that I'm not quite ready for prime time when it comes to videoblogging, but I've got a good idea where to start.

Because there's such a wide range of bloggers at BlogWorldExpo--political bloggers and sports bloggers, real estate bloggers and PR/Marketing bloggers, Mil bloggers and med bloggers and, yes, mommy bloggers--there are a wide variety of sessions and tracks to choose from. No complaint there at all. The exhibits on the showfloor were similarly diverse. There, too, I tried to narrow my focus to those exhibitors that had something to say to MidLifeBloggers, and in the future I expect you'll see some results of my conversations. But---you knew this was coming, didn't you--here's where BlogWorldExpo leaves me cold: the socializing.

Yes, there are parties and sponsors and keynotes and-- it all seemed aimed at guys in their 30s and their aging wannabes. Okay, it's Vegas, so probably the emphasis on waitresses with huge tits is unavoidable. But what was with the showgirls wandering around with a photographer in tow at the Opening Night party at the Mirage's JET Nightclub? And why is it that the open bar at all the "official" parties offered only bottles of warm beer? And who decided that the Closing Keynote should be Guy Kawasaki playing (badly) David Letterman to Kevin Pollak, Chad Vader and Jenny The Bloggess? You've never heard of Chad Vader? Oh, then you're not a thirty-something geek who's never gotten over Star Wars. And Jenny The Bloggess? I know she's got quite a following; what I can't figure out is why. Her "humor" (quotes intentional) seems aimed at--oh yeah, thirty-something guys and their aging wannabes.

It is possible to create a party that appeals to men and women, young and not so young. ScreenLife did it at their party to introduce their new game SceneIt. Next year at BWE10, I suggest that there be several women on the party planning agenda. And, at the least, the beer be icy cold. Oh, and a couple of near-naked dudes be sent to the various venues wander around for the viewing pleasure of the ladies. Is that too much to ask?

The Boys Are Back 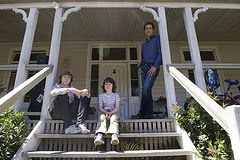 ...and so am I. At least occasionally. This is cross-posted from MidLifeBloggers but I don't know who reads that or who, if anyone, reads ByJane.

People who know me know that I'm a real snippy critic when it comes to movies. Much of what the film industry puts out earns Three Snorts from me. So when I tell you I thought a movie was terrific, trust me--it was terrific.

Last night I went to a screening of The Boys Are Back. I didn't expect anything special. Didn't really know much about the film except that it starred Clive Owen and had boys in it. To what end, I wasn't sure--and really, that wasn't the point in my going. It was a screening, for heaven's sake. Shades of Hollywood, for heaven's sake. Not to mention a chance to make myself feel like LA's not that far away. So I met up with Margaret of NannyGoatsInPanties and Alena of LenaLoo's Inner Green Fairy and Larissa of no blog at all, bought myself the popcorn I must have to watch a movie and settled back to see what was what.

It's about filmmakers not going the quick and dirty route with heavy-handed symbolism and Lessons Learned. No manipulation by music, no cheap Hollywood tricks to create an emotional response. Scott Hicks, the director of Shine and producer of Billy Elliot, directed it, from a screenplay by Allan Cubitt, which was based on the memoir, The Boys Are Back In Town, by Simon Carr. They have created a spot of real life in a movie theatre. Truly, if I hadn't recognized Clive Owen, I would have thought I was watching a documentary. I loved the world they created on the screen and, frankly, I didn't want it to end.

I can't remember the last time I was so touched by a film. Yet, such is the world of movies these days that I don't think I would have seen it if not for the screening. Too many bum deals out there for $10.50 a pop. Too many films where the best thing going was the popcorn. So I have to thank Melissa from Women and Hollywood for getting me on the hallowed screening list. And I have to thank the filmmakers, all those involved, for creating a film that made me remember that moving pictures are indeed an art form and that the best of them reflect who we are and refract our values.

BlogHer'09: The Good, The Bad and The Meh

I wasn't going to post today, because--well, I just wasn't. Then I read this by MaggieDammit and she voiced so much of what I'm feeling about ByJane and MidLifeBloggers. I offer it to you just to let you know where my mind is--sorta--and that I don't know if I'm done here forever.
Posted ByJane at 1:28 PM 8 comments

If You're Already in the Market...

This is a Flickr badge showing public photos from By Jane. Make your own badge here.

This work is licensed under a Creative Commons Attribution 3.0 License.